April 12, 2021
Outland is a scifi movie made in 1981, and is of the same vintage and style as Alien and Blade Runner - and Classic Traveller! As many have noted, it is essentially High Noon in space. A federal Marshal comes to the mining colony of Io run by the interplanetary conglomerate Con-Am, and finds the place violent and corrupt, and the men abusing stimulants to work harder. Scientifically, it falls down in three places: lights inside helmets, explosive decompression, and the composition of Io.
Scifi films have lights on in people's vacc suit helmets for the same reason medieval films have the hero not wear a helmet at all, so we can see the face of the actor the producers paid all that money for. Explosive decompression, where a sudden loss of pressure leads to people exploding, simply does not happen as depicted; this puts Outland partly in the schlock scifi category. As for Io, in the film it's presented as a rocky body, we now know it to be... strange - but they used what was known at the time.
Otherwise the science is ordinary. Cryosleep is alluded to but not shown, and journeys between planets take months. People still need air, food and water, get sick and injured and die. There is no mention of artificial intelligence or androids or lasers or fusion power - it's left undefined. In any case none of these scientific accuracies or inaccuracies make a difference to the plot, or the overall style of the film. The fact is that if space travel were relatively rapid and safe, it is likely things would look more like Outland and less like Star Trek. In our modern world, the fancy electronics we make and view these blogs on are made in part by cobalt mined by child slaves in the Congo. There is no reason to suppose that the future will be more glamorous or humane than the present.
Children can deal with tropical weather, but they cannot handle Arctic weather like oil fields in northern Alaska, and wouldn't do well in a vacuum. Mining colonies in space would, like those in remote regions on Earth, consist of mostly men, and men who could not get better opportunities elsewhere - men with poor educations, low social status, and criminal backgrounds.
The women will be support staff or prostitutes, and a small minority of total numbers. In general there will not be racism - the men are all in the shit together. Conditions will be spartan. The men will be well-paid, but there will be substance abuse and gambling so they won't keep it. Goods and services will only be available from a company store at inflated prices, or there will be ruinous government taxes. Workplace safety will be minimal, and men will be injured or die from accidents and malice frequently. The place will be cramped, uncomfortable, and it will stink.
Such a place is of course ripe for adventure. Adventurers require a certain amount of lawlessness and lack of authority. There's a reason Firefly was set in the colonies, not the core worlds, that the catalyst of change in The Expanse is the Belt, not Earth or Mars, and there's a reason postapocalyptic settings are becoming more popular for television drama - chaos and lack of authority means adventure! Whether the adventures choose to be the guys smuggling dangerous drugs to the miners, or the honourable lawman trying to stop them, that lawless place on the fringes of civilisation is where it'll happen.
Classic Traveller players and referees should watch Outland for inspiration. As a bonus, I've statted up Marshal O'Neil. Because skills are a profession, his list of skills need not be long. 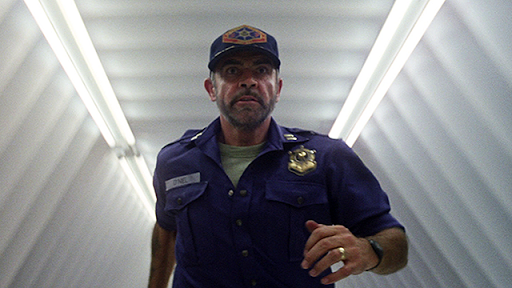 Marshal O'Neil
50yo, Marshal's Office 8 terms
978776
Brawling-1, Admin-1, Streetwise-1, Vacc Suit-1
O'Neil's age is not given in the movie, so we simply take the actor's age at time of filming. Nor are we given clues as to careers before his current one, if any, so we assume he's spent his whole life in the service.
He displays strength (9) matching that of manual labourers, neither worse nor better dexterity (7), but is able to run around quite a bit without puffing (8), and he plays squash. He displays no great general intelligence (7), nor education (7). As for his social status he says, "They sent me here to this pile of shit because they think I belong here." Something in his past has brought him down. As well, we see that he's unable to inspire the other lawmen to support him - only Dr Lazarus stands by him. This indicates a complete lack of Leadership skill, and relatively low social status - but he is a Marshal, so it's just one below average (6).
As for his skills, remember that every player-character has all weapon skills at 0, rather than the -5 default of the general population. But he seems particularly good at Brawling - it's a sensible skill for a lawman to have in normal circumstances, to control dangerous people without killing them. As well, his Strength of 9 is advantageous to Brawling, giving him a DM+1, for a total of +2 most of the time.
As a lawman he will have of course Admin, and we see him make use of it in going through files, making reports and so on. It also doesn't take long for him to figure out what's going on criminally and who's involved, a clear indication of Streetwise. And in parts of the movie he's able to engage in some shenanigans in what they call an "environment suit" without getting himself killed, so he has Vacc Suit skill.
He carries about a shotgun but does not display any particular ability with it. Nowhere inside the pressurised part of the mining colony will be a range greater than 50m. A shotgun at short (1-5m) range gets +1, one at medium (6-50m) a +3. Nobody in the movie wears body armour of any kind, which means another +5. With a +6 or +8 to hit and needing 8+, he doesn't need any skill, he can't miss. They need to take cover - or call in hitmen to deal with him, which is of course what they eventually do in the movie.
Four is not a lot of skills for a guy with 8 terms behind him, you'd normally expect at least twice as many, but he's also got decent physical stats despite being 50yo and thus having had to go through ageing rolls at 34, 38, 42, 46 and 50 - he must have thrown for "personal development" to keep his stats up at the expense of his skills.
He's a very playable character, as can be seen when you watch the movie. Which you should, to help you learn the right and proper way to play Classic Traveller.
CT