Gear needed for this article:

Commonly GM guides will tell you to draw a world, then a continent, put in mountain ranges and so on. This "top-down" approach (as detailed very well by Bat in the Attic) is lots of fun, because we all like to draw big maps. But it's less than useful for running a game, because you invariably get caught up in minor details that'll never see the light of play. On the principle of "the teacher only needs to be one chapter ahead of the students in the textbook," the GM only has to be a few hexes ahead of the players in the game world.

You only need a small scale. If you have a location service on your mobile phone you can review it and see that most of us only have three or four places we always go. Most medieval villagers never went more than twenty miles - a day's hard walk - from their homes in their entire lives. There's a reason people talked about "join the army/navy, see the world!" because for most people, that was the only way an Englishman would ever see India, or a Senegalese would ever see France. Adventurers of course are simply a small army with no proper leadership.

So you start small and build up and around it. The AD&D1e Dungeon Master's Guide is of course the foundation of all gaming wisdom, and it offers us some guidance on this. In the years since, people have developed many useful charts, and since the dice are always right, we just roll things up.

This is the procedure. I include the websites first. As always, don't worry if the results are weird - "How can the knight be lawful evil and his wife chaotic good?" because the dice are always right. Roll it up now, make sense of it later.

The scale used will be one mile hexes. This is the recommendation of the DMG p173 as pictured above, and is actually a decent scale. Look at a map of where you live, a mile across contains quite a lot of people and scenery. A medieval fantasy world will be less populated by people, but - like a wilderness area today - have more animals. 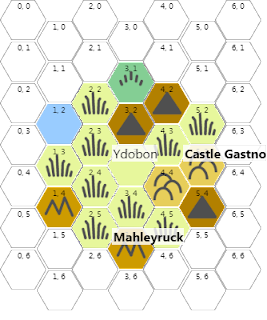 Edit: 2022-01-26: I do a regular livestream with DungeonDelver, and a recent one showed how to create a game world - from the hex on up. You can watch it to see this in action and get some more ideas; the first half-hour is chit-chat, and after two hours I'm off and they game, but from 30'-2hr it's hex crawling.