Traveller gets around a bit as a system - editions up to the telephone book "toolkit" (aka "we designed it for gearheads who never play") - as well as d20, GURPS, Hero and so on and so forth. If Traveller were a date you would definitely use a prophylactic. But as with so many game systems, the authour got it more-or-less right the first time. And so we play Classic Traveller.

Classic Traveller, most especially Books 1-3, like AD&D1e, RuneQuest 1e and the like, is a good system because not despite the fact that it is incomplete. You fill in the blanks.

Fill in the blanks

Many a pointless argument has been had because all communication was by brief text, and without the use of many carefully-chosen words, text lacks tone - and without a clear tone to the next, people fill in the blanks with their own mood at the time. This happens in romance, too: without regular communication from someone they like, a person will fill in the blanks with their own desires - "She really likes me!" - or fears - "She's forgotten all about me." And anyone who's watched a horror movie knows that the monster heard slithering about in the attic is more frightening than the one standing before you.

And so, an incomplete system is better than a complete one. If a system is complete, then when read it evokes nothing in the mind - nothing more than is written. If a system is incomplete, then the reader fills in the gaps with their own imagination. For example, in AD&D1e the description of "fighter" makes no mention of home culture or era. Is this a saxon thane in the line against Viking invaders? The Viking invaders themselves? A lamellar-clad model for the terracotta warriors of Qin? French heavy infantry at Agincourt? A young squire daring to seek out and fight a werewolf? The girl fighting the jabberwocky? A bronze-clad warrior of Sparta? A daring Amazon of the Crimea, firing her bow from her horse at Greek invaders? An Iron Age warrior of Kush? A samurai? It doesn't say. You fill in the blanks! If it were more complete, you could not do this.

Likewise with Classic Traveller. Is it a gee-whiz setting powered by handwavium like Star Trek or Star Wars? Nuclear rockets like Buck Rogers? Do men fight robots like Battlestar Galactica? Are you confined to one planet like Barsoom? Do you explore your own solar system with near-future technology like Mission to Mars or 2001: A Space Odyssey? Will it be Western in space like Outland or Firefly? Gritty nasty politics like The Expanse? Will most world be hot Jupiters and giant ice balls like what we seem to be finding in exoplanets today? Or will every world look like the woods of British Columbia and everyone speaks english, like Stargate: SG-1? Will humans be the only aliens, or will there be a succession of humans in ugly rubber masks confronting the heroes in the BBC quarry? It doesn't say! You fill in the blanks!

Books 1-3 mention everything which existed in 1977, like slugthrowing firearms and blades of various kinds, some drugs - and lasers. As for the rest... well, starships, they mention Jump drives and liquid hydrogen fuel, and power plants - but wait... are these fusion powered burning the hydrogen or some isotope? Fission-powered using the hydrogen as reaction mass? Some sort of high-tech batteries? A Dune Navigator in a box who subsists by drinking liquid hydrogen? Something else? It doesn't say! You fill in the blanks!

And wait... artificial gravity? Does this only come when the ship is accelerating? What about if they do 6G - 6 times normal Earth gravity? Is everyone strapped into a couch being pumped full of drugs like in The Expanse or do they pass out like when Tintin goes to the Moon? Or is it all handwaved except when it would be dramatically appropriate for the ship to shake side to side in battle like in Star Trek? It doesn't say! You fill in the blanks!

This applies with the skills, and many other aspects of the game.

The above listing of skills and game effects must necessarily be taken as a guide, and followed, altered or ignored as the actual situation dictates.

Book 4 on up and later editions filled in these blanks. They are less popular for that reason, becoming MARPs - much-admired, rarely-played, the books collecting more dust than cheezel-stained fingerprints. The authour, like the authours of so many other popular series of books, television shows and movies, was drawn helplessly to fan service, and people's imaginations were suffocated as a result. Thus the prudent gamemaster will stick with Books 1-3.

Nobody is creative when faced with a blank page, they need something to get them started. But likewise, nobody is creative when confronted with a game book which could plausibly be used in self-defence against firearms. When a game is complete, imagination is confined to the boundaries drawn by the game's authour, nobody dares come up with anything lest it contradict what the authour said in the second sentence of the third paragraph of page 423. When it is incomplete, the players and referee are free to imagine things as they see fit.

As my brother says, "Roleplaying is a social way to be creative with friends." We are most creative when we have a basic but incomplete framework, enough to spark our imaginations. Begin with Classic Traveller Books 1-3, and you fill in the blanks! 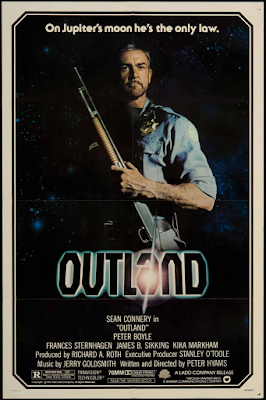 Cliched? Yes! That's why we like it! Outland is a scifi movie made in 1981, and is of the same vintage and style as Alien and Blade Runner - and Classic Traveller ! As many have noted, it is essentially High Noon in space. A federal Marshal comes to the mining colony of Io run by the interplanetary conglomerate Con-Am, and finds the place violent and corrupt, and the men abusing stimulants to work harder. Scientifically, it falls down in three places: lights inside helmets, explosive decompression, and the composition of Io.  "I can feel schlock crawling all over me!" Scifi films have lights on in people's vacc suit helmets for the same reason medieval films have the hero not wear a helmet at all, so we can see the face of the actor the producers paid all that money for. Explosive decompression, where a sudden loss of pressure leads to people exploding, simply does not happen as depicted; this puts Outland partly in the schlock scifi category. As for Io, in th
Read more