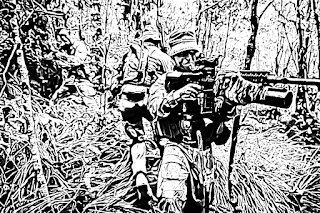 In any game system, one of the more difficult aspects is initiative. Who gets to go first, and why? If they can act, how much can they do in each round? Can the foe interrupt their action? Can they change their minds partway through the round? Every system is necessarily an imperfect abstraction. Luckily, abstractions work - if you do them right. Because Conflict has the aim of encouraging scouting, planning and teamwork, as well as trying to model individual training beyond performance on the firing range, Readiness is key.
The unfortunate truth is that there really only three kinds of combats:
The sensible adventurer will endeavour to ensure they are always ambushing. An ambush is achieved when the attackers achieve surprise. When two parties come across one another unexpectedly, or when one lies in wait for the other, there is a check for surprise. The throw is:

The difference between the totals is the free actions the winner has before the loser can react. On some occasions, Presence or Acting may be relevant, for example a disguised person suddenly attacking someone in a crowd is also an ambush. If the victim is making a deliberate effort to watch for danger, they move at half rate, but get a +1 against surprise.
Terrain may grant a bonus to either party, for example a group hiding behind rubble in a destroyed city, or with a scout at a nearby high point, or a group moving through a jungle.
Once surprise has passed, initiative is used.
Note that because surprise gives a certain number of actions before the enemy can react, even a combatant with Readiness+0 may act usefully – while they've surprised the enemy. After that, they become useless. An example of this was given in the Readiness article, where slapper Ginger (Readiness+0) ambushed Merkava on her way into the ladies' - but not having neutralised Merkava in the surprise rounds, was then helpless.
Thus, surprise will tend to go to the group with a designated and able scout who take their time moving through protective terrain, and with well-trained and experienced members.
After the surprise round has passed, regular initiative is used. This is,