The Weapons vs AC table in AD&D1e is one of the many examples in gaming of a good idea executed badly. It was very obviously an afterthought, unplaytested and shoved in at the last minute because some gearhead player demanded it.
It is a good idea because on the face of it, weapons should have some variation between them other than the sheer amount of damage they do. After all, historically some weapons were developed to deal with certain armours, blunt weapons to deliver blows through armour which could not normally be pierced, hooked weapons to pull armoured knights off horses to fall on the ground, and so on.
It was poorly-executed because no player was going to write down their to-hit rolls vs various ACs on their character sheet, which meant more time in play looking up charts and adding up numbers, and people would of course argue about AC2 coming from plate mail and shield vs it coming from some other armour plus good Dexterity, and so on.
This is the reason for the house rule of weapon vs AC in our campaigns. The below charts are used. 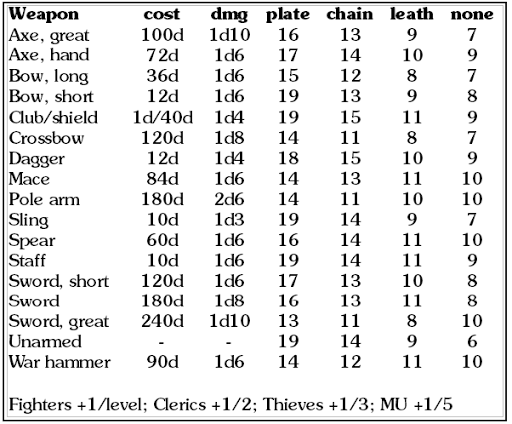 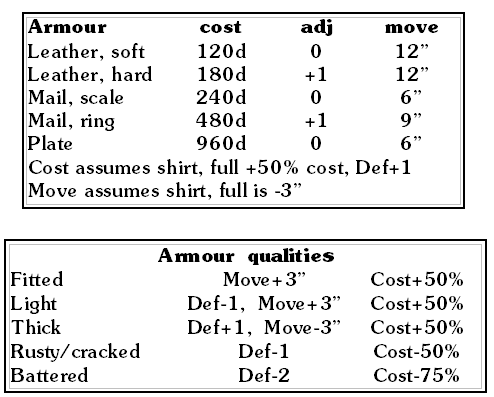 Some explanation is in order. The armour numbers assume a standard "shirt" or cuirass, and "chain" includes both scale and ringmail. Weight is not given, but only its effect on a standard human's default move of 12" (which cannot be exceeded non-magically).
A fitted suit is one which has been specifically adjusted for that particular wearer. Large militaries offering off-the-shelf armour will have only two sizes: too large and too small. The light suit is one designed as thinly as will hold itself intact outside combat, this makes it lighter and allows the wearer to move more quickly, but makes it less effect as armour. The thick or heavy suit is one which has been designed with extra layers, slowing the wearer down but offering better protection. The rusty/cracked suit is one which has been poorly-maintained or left in a hole in the ground for a long time, and it offers less defence. The battered suit is one where the wearer was killed in it - with numerous holes and dents, soaked with blood and viscera, it is less useful for defence. The qualities may be combined.
The player or DM should note the total adjustments to their armour, for example Lady Bawdry has a scale shirt, so she will move at 6", and Humpy the 0-level man-at-arms with a spear will need 14+ to hit her. Later she upgrades to a full suit of scale mail, so she moves at 3" but with Def+1. Humpy now needs a 15+ to hit her. She has this suit made thick, but realising she will be unable to move gets it fitted, and moves at 3", and with another Def+1 Humpy needs 16+ to hit her. 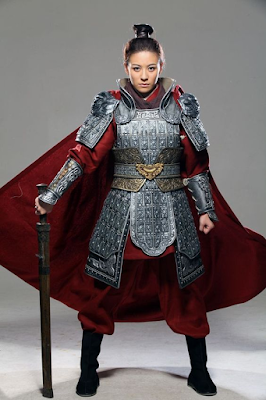 After dispatching Humpy, Lady Bawdry loots his remains. Humpy was wearing a ring mail shirt, which in normal circumstances would allow Bawdry to move at 9", and give her Def+1 on the chart; but this one is thick and so imposes a move of 6", though gives her Def+2 in all. Which is to say, the thick ringmail shirt gives her the same defence as her thick fitted full suit of scale - while allowing her to move more quickly. However, when Lady Bawdry fought Humpy she thoughtlessly battered his armour, causing Def-2. If she takes it back to town for repair it may be worth changing over.
We can now see the advantages and disadvantages of various weapons. For example, we already know the shortbow can normally be fired twice each round, and the longbow but once, while the crossbow is fired at most every second round. But someone like Lady Bawdy firing her shortbow would need (allowing for her as a 1st level fighter) 18+ to strike Pierre in his plate cuirass, but only 14+ with a longbow - and only 13+ with a crossbow. We also see that the mace would be a better choice in dealing with Pierre than her longsword.
With these sorts of rules, the choice of weapon becomes based on something more than cosmetic concerns, and the fighter's having several weapon proficiencies to begin with is significant - not only can they use weapons better than others, but they may choose one to suit their opponent.
AC AD&D1e armour weapons