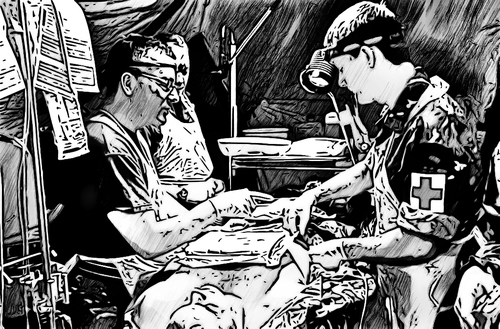 In Conflict: the adventure game of modern warfare we have tried to establish a more-or-less realistic wounding system to cover modern combat. This was inspired by Charles Franklin's article Hitting Them Where It Hurts.

From Franklin, we learn that of those wounded, the wounds will break down as below. KIA being death, INC being incapacitated, and WIA being merely wounded. Note, this is not the results of every “hit”, but of wounds requiring treatment. It might be for example that there are actually proportionally more hits on the torso compared to the head, but that torso hits are less likely to require the attention of a medic. But in a tactical or roleplaying game, we are not interested in hits but hurts, what takes the person out of the fight permanently (KIA), temporarily (INC) or hinders them (WIA).

No breakdown of limbs is given, we assume exactly half of wounds on each of arms and legs. Probably roughly even chances of each limb being struck are right for fire combat, but with mines and IEDs, legs are more likely to be struck than mines, in any case it'll most likely all be lost in the randomness of the dice, and the referee can always adjudicate things so that stepping on a mine doesn't leave your legs intact but blow your nose off.

We further learn, that of each area wounded, a certain fraction have results as below.

So that for example we can say that of all hits requiring medical treatment, some 2.94% will be on the torso and have an incapacitating effect, while 9.24% will be on the head and cause a KIA effect.
Franklin gives a further table of wound results when armoured, but this does not factor in that armour entirely prevents some wounds. But he does say that helmets stop 25% of fragments and 4% of bullets, and vests stop 75% of fragments and 25% of bullets. Franklin suggests a sort of armour "saving throw" to see if the armour stops the hits, but on the principle of momentum over perfection, we would have things resolved in as few rolls as possible.

SECOND, we multiply these results by the effectiveness of each armour, so that some of the wounding results become “none”.

Limb armour was not covered in Franklin's article, we will assume that it acts like vests, but only half as effective since it covers at most half the limb.

A KIA/INC/WIA result we will call a wounding effect. Putting this together into a single chart, we find the below:

rounding the figures to nearest unit gives us,

And expressing each as rounded chances in 36 (to make it a d6,d6 throw),

From this we can make 3 charts. In each case, after establishing that their character has achieved an effective hit on the target, they make a throw which gives the location and the effect. If that location is unarmoured they consult the first results column; if armoured, then the second column for armour vs fragment attacks (explosives and shotguns), and the last for armour vs bullet attacks.
The first chart is a d100 throw. The second is a d6,d6 throw. Lastly there is a chart where the odds have been altered so that 11-16 are head, 21-26 are torso, and so on.
Franklin's article does not give consideration for different armour levels, probably because, "The bulk of the data used in this article is drawn from the "73 Engagement Post-1945 Conflict Data Base" that spans actions from Indonesia 1946 through Lebanon 1982," and by 1982 there was not the great variety in body armour which exists now. Thus for Conflict, we rated weapons +1 to +4, and armour +0 to +3; if the weapon's rating exceeds the armour's, the target is treated as unarmoured, otherwise use one of the armoured columns.

We have touched above on the effects of armour and what the wounding effects actually mean, but will discuss them in further articles later.
Conflict wounding