Conflict: other ways to get hurt 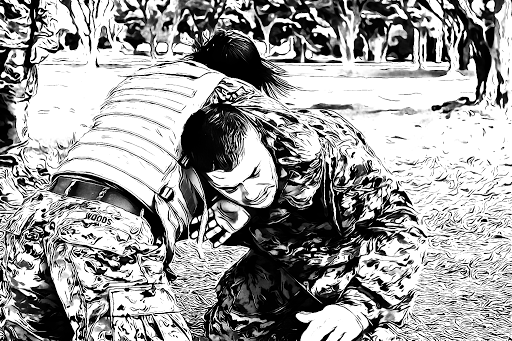 No game is complete without falling damage rules. And there are, of course, many other ways to get badly hurt, such as vehicle collision, suffocation, drowning, electrocution, flammable liquids, poison and disease. Cold, heat, thirst and hunger are also relevant, especially in a game of modern warfare, but we'll leave those till later and deal with immediate violence both accidental and deliberate.
These are abstracted with the wounding system, using the hit locations and wound effects.
Falling causes one blunt wound to a random location for each 3m fallen onto a medium-hard surface like grass. This may be protected against with body armour, with the falling injury using the "frag" category. A hard surface like concrete or metal adds a wound. A soft surface like a mattress subtracts a wound, as does being drunk.
The Athletics expertise has a familiarity breakfall, which automatically turns the first wound from falling onto the back - this always counts as level 1 armour, which is why people instinctively curl up into a ball falling a distance or on being knocked down in brawling combat. A throw of 10+ using Athletics/Breakfall will subtract a wound.
Falling example: returning to her pub brawl after laying out slapper Ginger, we find Merkava still hunched behind the bar under a rain of bottles, cans, drink coasters, and stools. There were in fact weapons sitting behind the bar, but since she is three sheets to the wind, she does not find either the shotgun nor even the cricket bat. And so she waits for a pause in the rain of bottles and mugs and chairs over the top of the bar, then leaps out and ran for the doorway.

Without consciously thinking about it, Jenkins goes through his use of force options. He has no firearm and in any case nobody's life is in danger so firearms would not be legally justified. She is already injured and is not directly threatening the police or anyone else, so use of a baton would be excessive. The taser has similar rules of engagement as for firearms, and so he cannot use that. That leaves only the Captor (capsicum) spray and physical restraint. Even small individuals when intoxicated can be difficult to restrain with bare hands, and this one, Jenkins can see, is built like a Soviet brick shithouse, and he doesn't think Milly will be much help to him.
That leaves the Captor spray, which he will follow up with physical restraint - equip the Captor in this round, fire (spray) and then fire (Brawling/Wrestling) in the next rounds. In his round, he will have an equip action for his spray, ready for use next round if necessary.
For her action, Merkava simply walks by Jenkins further towards Milly who is holding back. Worried what the suspect might do to his new Constable, Jenkins intends to spray her in the next round, where he again will automatically have initiative. Captor spray now out, he sprays Merkava.
She needs a 10+ with a DM of her Health+2 to avoid the effects of the spray. With a throw of 4,3+2 = +9 she just fails. Capsicum spray causes blindness and a DM-4 to all actions for 3d6 minutes - throws of 2,1,2 indicate she will suffer this for 5 minutes. She screams in pain. Notwithstanding her blindness and pain and snot streaming down her face she is determined to sort out Mr Plod. Having been wounded - or not wounded, but capsicum sprayed, which comes to the same thing - she has just Readiness+1 this round, and 1 action.

She tries to grapple Jenkins. She has Brawling expertise giving her DM+3, and Strength expertise for another +3. She is also drunk and twice-wounded for DM-7 in all, a net DM-1. She needs to throw 10+ and does so. For wounding she throws 1,4 - a INC result on the head. With a grapple, an INC result means a lock which the victim may try to break each round with a 10+ throw.
Suffocation - when deprived of air, each combat round the victim must throw 10+ with a DM of HT to remain conscious, or 12+ if they are exerting themselves at all. Should they have air restored to them they will awake by themselves in 2d6 minutes with a headache but otherwise unharmed, or in 1d6 minutes if given oxygen. If deprived of air past unconciousness, they must make a 10+ throw with a DM of HT, or acquire a KIA wound (notionally to head or trunk).
Suffocation example: Now having a lock on Constable Jenkins' head, Merkava intends to choke him out. He attempts to free himself, but has no Brawling or Strength and nothing else to help him, and with a 4,1 fails to throw 10+ on 2d6. He remains in her lock.
Now she squeezes, and he must throw 10+ with a DM of his Health+2 (he's active, but not athletic) to remain conscious. With a 5,5 and +2 he easily makes it.
In the next round he wins initiative again, and giving up on escaping the lock for the moment, calls "Milly, get her!" Since she has Readiness+0, he must lend her some some of his own Readiness using his Presence/Leadership+1. With a throw of 3,5 +1 he just misses. Milly hesitates and stands there gaping, holding her baton uselessly.
Merkava keeps squeezing and this time he fails and passes out. Still blinded, Merkava hears his gargle and feels his body go limp. She lets him drop to the ground not particularly carefully.
Constable Milly sees this and now remembering what Jenkins had told her, calls on the radio, "I need three patrol cars her, we've got an officer injured and a Charlie Whiskey Bravo out. Caucasian, 5'8", 12 stone... armed? She is armed with arms. She's a fucking tank and she fuck fuck fuck -" this last as Merkava staggers past uncomfortably close. "Out of my way, you silly cow," she mumbles. Milly steps out of the way and then rushes to Jenkins' side. He will wake in 2d6 minutes, the referee throws and finds it'll be 8 minutes.
Remembering her first aid training, Milly turns him over onto his side in case he vomits; vomiting while on his back would also be a test of the suffocation rules, since if suffocated beyond unconsciousness the person must throw 10+ or suffer a KIA wound to the head, which will cause death in several minutes.
Three other police cars with a total of six officers will arrive in 2d6 minutes. Now that she's choked out a police officer, they will have no hesitation in using tasers and batons. If she's really lucky they'll send out police dogs, too. With 3 minutes having passed since her being sprayed, Merkava's eyes will be clear in 2 minutes. She will still have her trunk WIA and left leg INC injuries giving her DM-4, and will still be drunk giving her DM-3. She is covered in filth and snot and has a distinct appearance, and is not moving well or quickly. Once her eyes clear, it's probably time for her to phone a friend.
"Bloody hell," she mutters to herself, "all I did was pash a bloke."
Later a co-operative Barry the Bristol driver is interviewed by police, and tells them how he attempted first aid on the woman but she threatened him. Milly later writes in her report about trying to free Jenkins. In time, both come to believe their stoies. Nobody thinks they have Readiness+0.
In conclusion, all games need rules for the many and various ways players will find to injure their characters and foes. As previously noted, this may be dealt with entirely abstractly - the terms KIA, INC, WIA and so on need not have concrete meanings attached to them. But some examples may liven up the game.
Conflict wounding